Straight Talk About Intoeing and Out-toeing 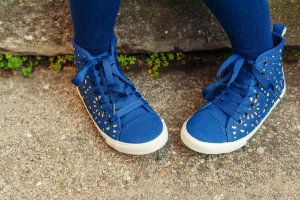 Every parent feels nothing in the universe is more beautiful than their baby. Nevertheless, those first few steps aren’t always graceful. Children need lots of time to develop bones and muscles in their lower limbs, and sometimes toes don’t start out pointing exactly where they’re going to end up.

We’re talking here about intoeing (also known as pigeon-toed) and out-toeing, two related sets of conditions that are collectively quite common (especially intoeing) in children under age 10.

When Toes Turn In

Why might a child’s feet point inward when they stand or walk? The answer is not always certain, although it’s believed many cases can be traced to the position of the fetus in the uterus. Genetics and family history may also play a role in certain conditions that can cause children’s feet to turn. They differ in terms of both where the rotation occurs, as well as when symptoms emerge or are most prevalent.

A Closer Look at Out-Toeing

What a Parent Should Do

The good news is that both intoeing and out-toeing are considered to be a fairly normal mode of childhood leg development. Such cases usually do not cause any pain, almost always resolve on their own in time, and rarely require any medical intervention.

That said, you should make an appointment for your child with a podiatrist if you notice something amiss, just to be sure you can rule out certain underlying conditions (such as nerve or muscle disorders) that would require treatment.

Once an expert has determined there’s no need for immediate treatment, your best option is to simply keep a close eye on your child and watch for any changes in leg alignment or walking gait. Because this can happen very gradually, we recommend you take pictures or video of your child at regular intervals (say every 6 months) and compare.

What We Can Do

If you notice any signs of pain or discomfort in your child, limping, developmental delays, or notice in your video reviews that a case of intoeing or out-toeing has not improved (or gotten worse) after a year of walking, you should bring your child back in for an evaluation.

Traditional options such as bracing or special shoes have been tried in the past, but are often unsuccessful. We will help determine whether certain specialized tests may be helpful in isolating any other underlying or complicating conditions that may be present. Surgery is usually only considered if the condition has not improved by about age 10.

While intoeing and out-toeing are usually nothing to worry about and rarely require more than your watchful attention, the experts at Family Foot & Ankle Center want to make sure your child gets the best possible attention and care. To set up an appointment for you and your little one at one of our 6 Greater Cincinnati locations in Ohio and Kentucky, give us a call toll free at 888-689-3317.